Pathogenicity in M tuberculosis is considered to be a multi-factorial process, with both pathogen and host-response effector molecules contributing to the process of infection. These interactions may lead to the control of infection, promote disease or induce long term dormancy. As such pathogenesis is a product of the host-pathogen interaction and is closely related to the ability of M.tuberculosis to grow and survive inside host macrophages. Understanding the details of pathogen-macrophage interactions, as well as the means by which the bacteria adapt to and survive its extra-cellular phase of infection are priority areas of research.

Approaches in this laboratory using an infection model utilising macrophage derived cell lines, have demonstrated that protein profiles analysed by 1 and 2D gel electrophoresis differ between Mycobacteria grown inside macrophages when compared to in vitro grown organisms. These observations have been extended to experimental murine tuberculosis with Mice infected using either an acute or chronic infection model, these model systems essentially mimic acute or chronic infection by exposing Mice to differing bacterial load. We have shown that in both models similar 1D protein profiles are observed for the vast majority of proteins when compared to in vitro grown Mycobacteria. However as with the Macrophage model important differences are observed between the acute and chronic models. Proteomic approaches using 2D gel electrophoresis are under way to establish the nature of differentially expressed genes utilising the in vitro Macrophage and Mouse systems. 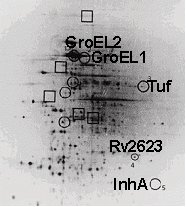 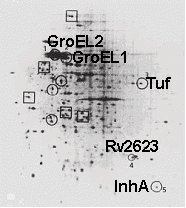 We have already established methods to effectively isolate Mycobacterial proteins from Macrophage and tissue specific proteins and that these models yield sufficient bacteria for subsequent protein analysis and identification by gel electrophoretic means. Our studies suggest that a proteomic approach using 2D gel electrophoresis and mass spectometry to identify peptides, when used in combination with bioinformatics would prove to be invaluable. Such an approach to differential gene expression in M. tuberculosis following infection in a variety of experimental and natural infection systems will lead to insights into novel gene expression profiles

The cooperative group actively supports the Medical Biomics facility (intranet only access) at St George's now  expanded to incorporate Metabolomics with a 600 MHz (14.1 Tesla) Bruker vertical bore spectrometer. The core facility and provides access to microarray, real-time PCR, high through-put sequencing and SNP analysis technology. A range of core equipment including an Agilent Bioanalyser is available. In addition a for  investigating the proteome the facility provides the group with access to a Kratos Axima MALDI-TOF instrument and Ciphergen SELDI Mass Spectrometer a ThermoFinnigan LCQ Deca Plus in addition to standard 1 and 2D gel electrophoretic equipement & a Molecular Dynamics Typhoon.